We’re at 14 weeks and feeling great coming into the 2nd trimester. Our little Eggroll should be about the size of a lemon. My energy level is back to normal and my complexion is settling down.

Adam and I went to our first prenatal appointment last Tuesday and were amazed to see our baby on the ultrasound screen. We expected to see an unrecognizable blob, and literally gasped in surprise when we saw a fully formed, tiny human being. The doctor gave us an estimated due date of September 29th. 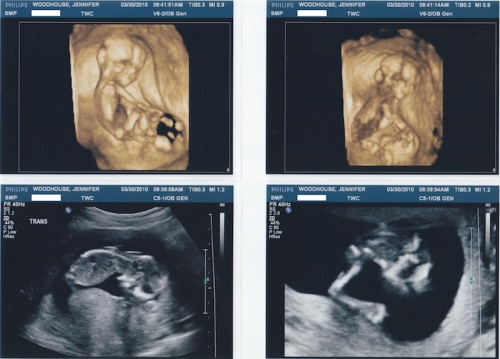 Now that we’re back in the country, we were able to finally spill the beans to our parents, which was so exciting. I bought a couple of souvenir T-shirts from Japan and gave them to my parents. Then I handed them an envelope containing our sonograms and said, “this was also made in Japan.” It took my mom a few seconds to process exactly what she was looking at. As soon as it dawned on her, her jaw dropped on the floor and she started jumping up and down, beaming. She shared the photos with my dad, who tried to discreetly wipe away tears. It was priceless.

Later that night, when we all sat down to dinner, my dad spread the sonograms out on the table and said that his grand-baby was joining us for dinner. So cute.

When we broke the news to Adam’s parents, we were out to lunch at our favorite Mexican restaurant (finally satisfied that chips and salsa craving!) and Adam’s dad jumps up, throws his arms up in the air and announces to the entire restaurant that he’s going to be a grandfather. The restaurant applauds while Adam’s mom quietly wipes away tears of joy. Classic.

My mom predicts Eggroll will be a boy, while my dad thinks it’ll be a girl. Mom’s reasoning is based on the shape of my bump. According to Dad, if you’re having a girl, you glow, and if you’re having a boy, you look… um, less than attractive. Ha! How about you guys? Have any old wives’ tales that you go by to predict gender?