Restoration Hardware sells these nightstands for $369 each.

Sigh… aren’t they beautiful? But are they $369 kinds of beautiful? I think not.

So, armed with Ana’s plans, I waddled up and down the vast, intimidating aisles of Lowe’s gathering my supplies. It was the first time I took a trip to Lowe’s to buy lumber without my husband. I was a little apprehensive at first, but once I got there, I felt very empowered. It didn’t hurt that all the friendly, strapping young men working in the lumber department were more than happy to assist me. What a peculiar sight I might have been: imagine 1 tiny Asian girl + 7 months pregnant + pulling a cart full of lumber behind me = strange looks all around. Ha.

I made sure to measure twice before making any cuts (Watson supervises): 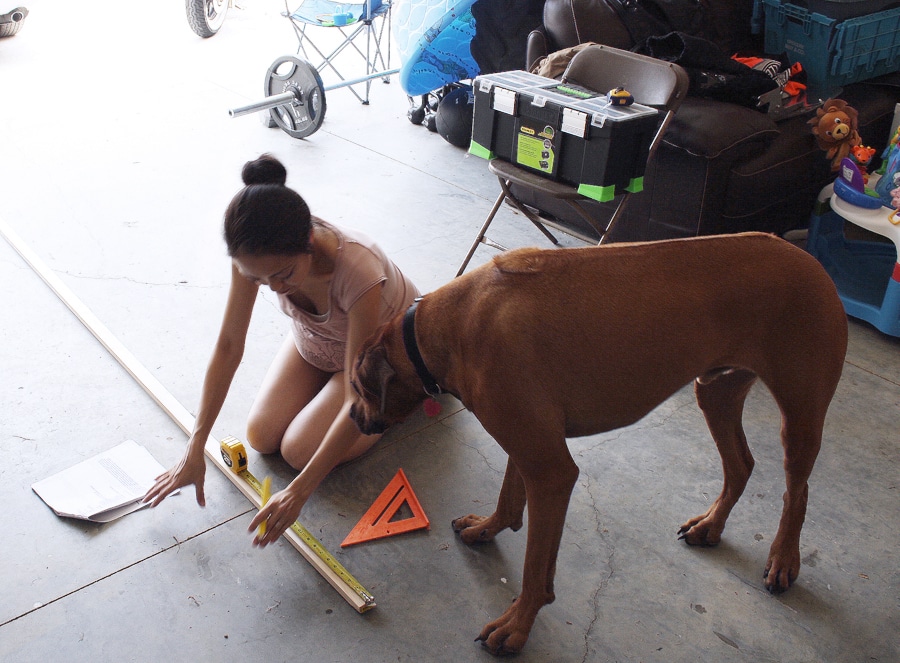 Here are my cut pieces. I doubled what was listed in Ana’s plans for two nightstands. Also, I found that I ended up needing 10 of the 1x4s @ 22 1/2″ (instead of 8) because I used 5 boards for each nightstand top (4 boards didn’t cover the whole top). No idea why my numbers were off… 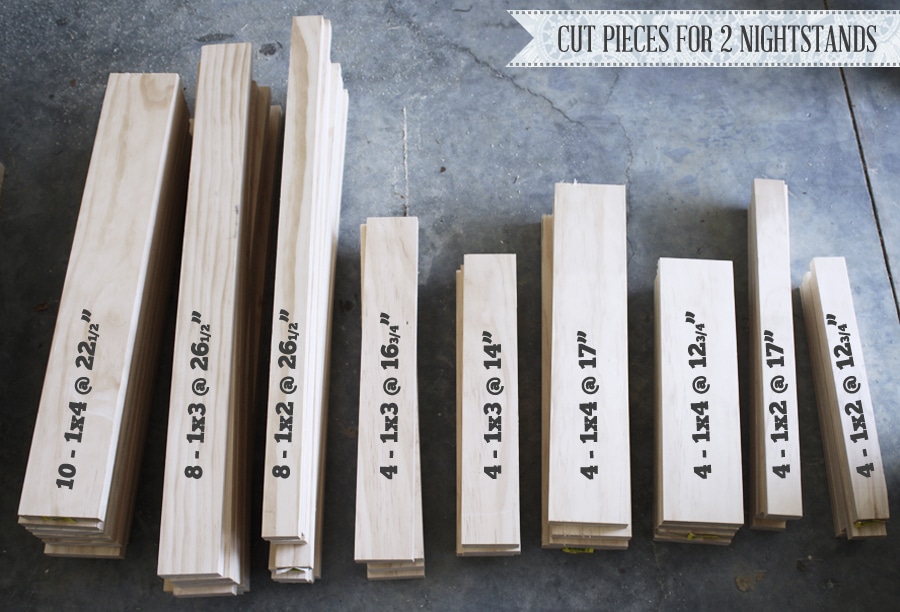 By the way, can I just tell you how much I love my compound miter saw? It was a Mother’s Day gift from the Hubs last year. And look! I was able to get all my cuts done during nap time. 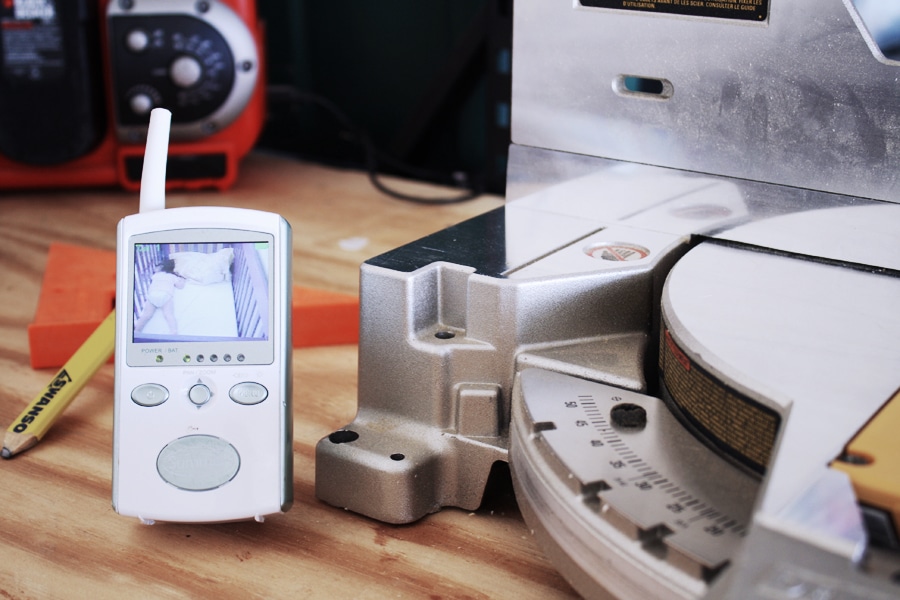 After all my cuts were made, I busted out the trusty Kreg Jig and drilled a few pocket holes in my pieces then joined them together to make the sides, front, and back frames: 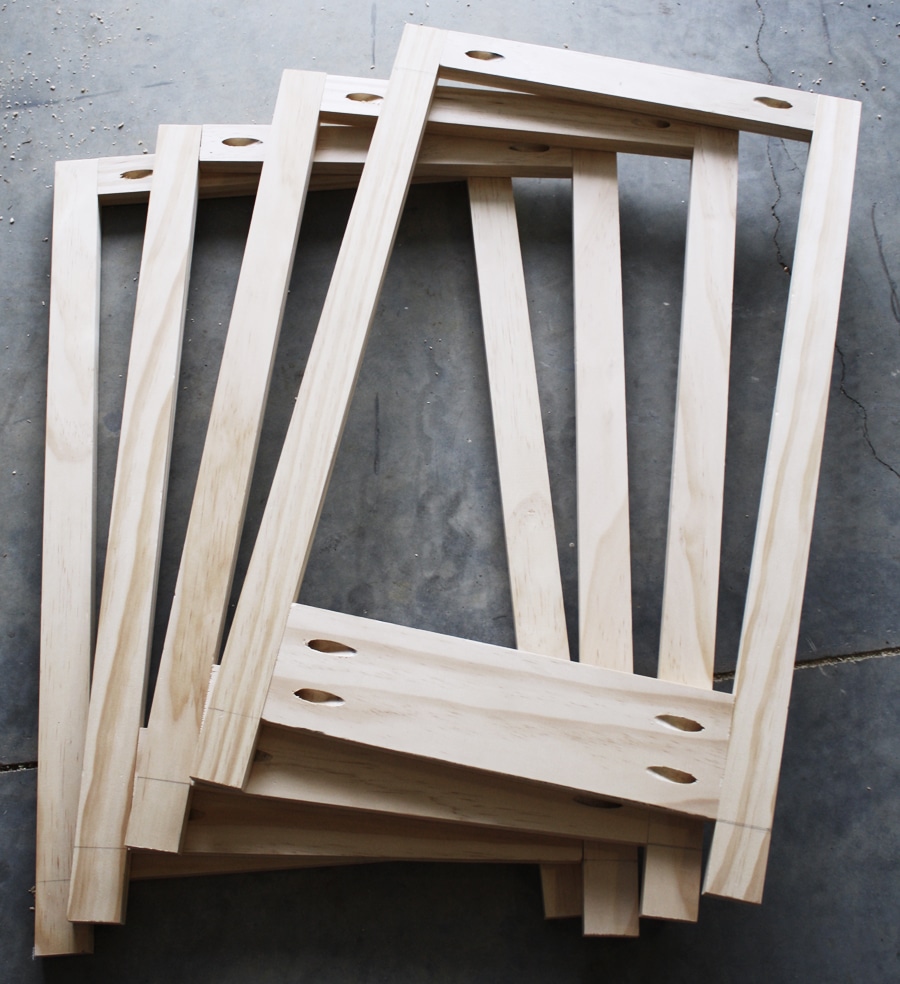 Then after cutting some plank paneling down to size, I nailed them to the insides of the side frames. The frame on the right shows what it looks like from the inside of the nightstand and the frames on the left show the outside. Puuuurty. 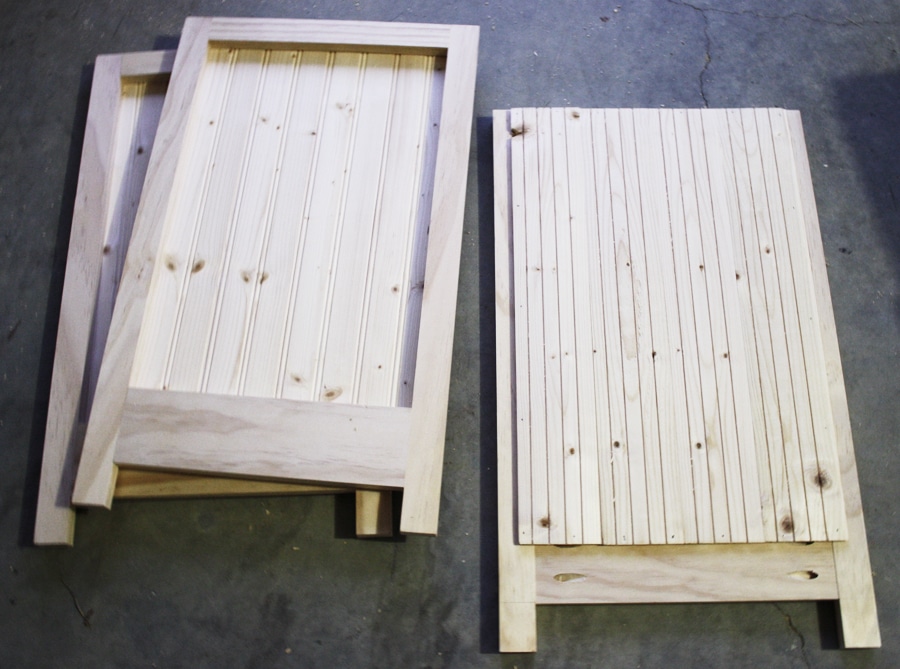 Next I drilled the bottom pieces of plywood to the side frames. Well, hello there, morning laser beam of sunlight shooting directly into my garage making it a sweltering sauna. 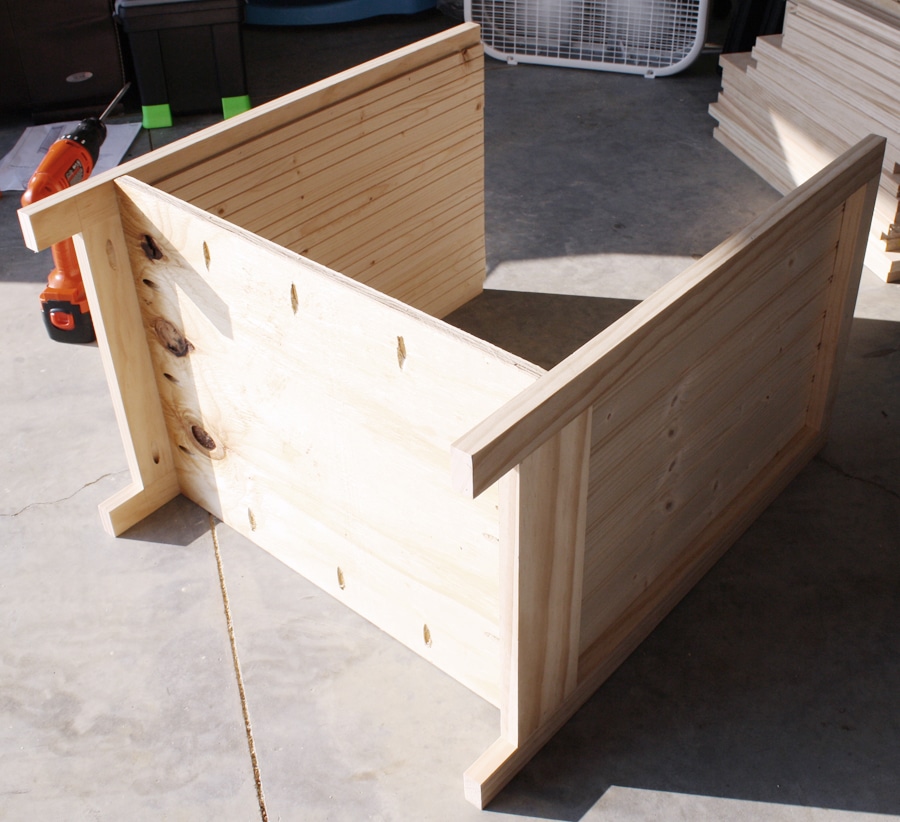 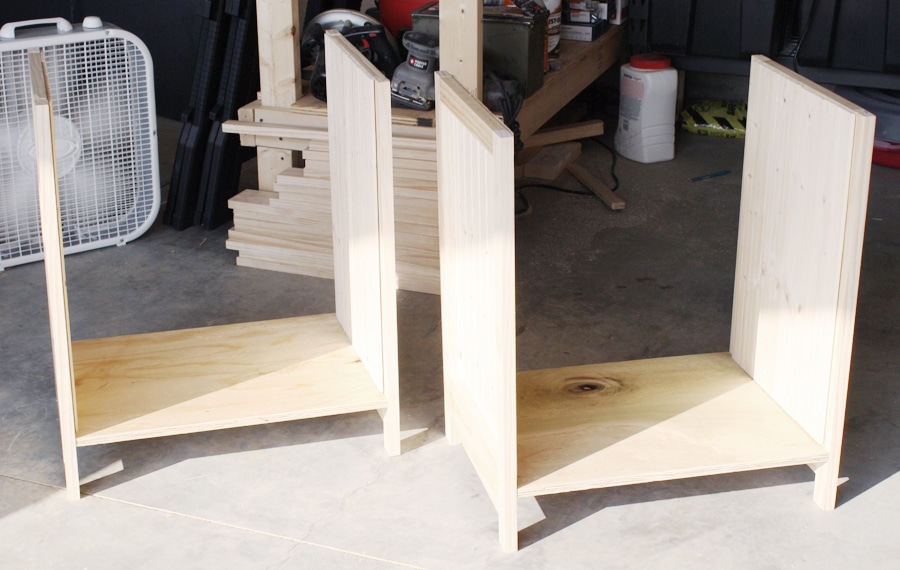 Next, I glued and nailed the front frames on, drilling pocket hole screws in on the bottom shelf. Also, because I’ll be putting these nightstands in a place where the back is exposed, I chose to continue the plank paneling on the back, instead of using a sheet of plywood for the back panel. I think it’ll look more finished that way. Here’s the back frame, ready for the plank paneling: 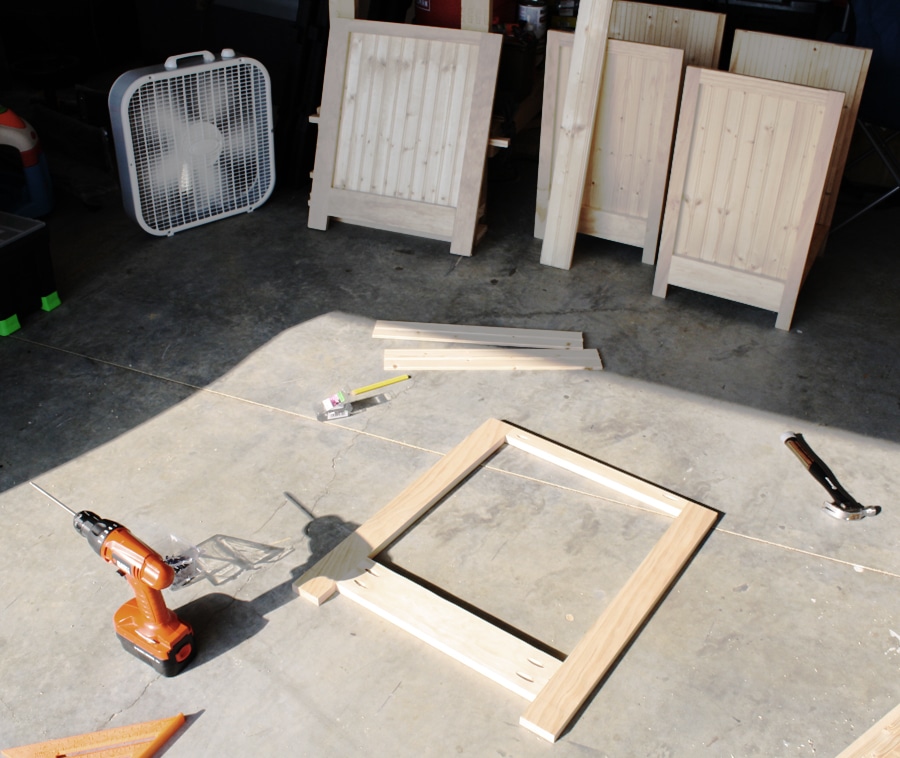 I attached the plank paneling to the back frames just as I did with the side frames (using glue and 3/4″ finish nails). The nightstand on the left shows the inside of the back panel and the one on the right is what it’ll look like from the outside. 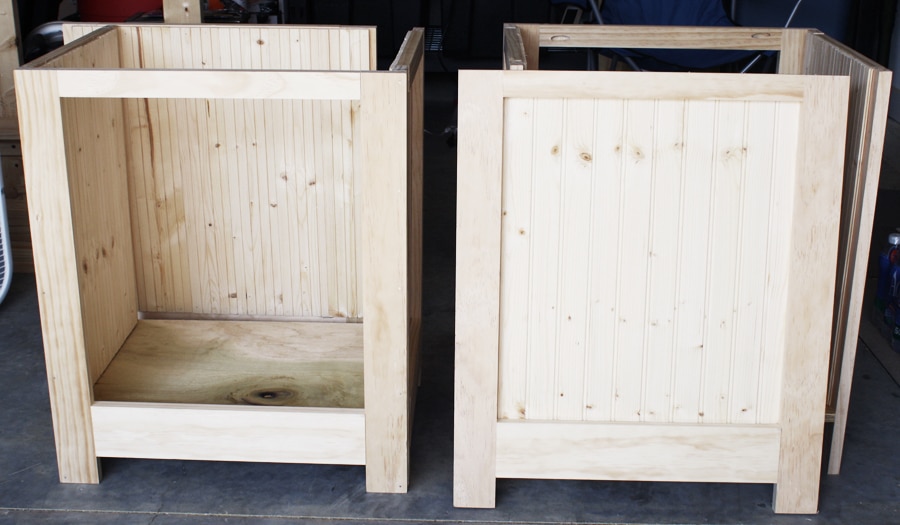 Then I glued and nailed the back frames onto the nightstands, drilling pocket hole screws in at the bottom shelf. Here’s the  view from the back (hellllooo, lovely!):

Now to construct the doors. I Kreg Jig’d em up and zipped some screws in:

Then added the plank paneling. The door on the left shows the inside, and on the right is what it looks like from the outside: 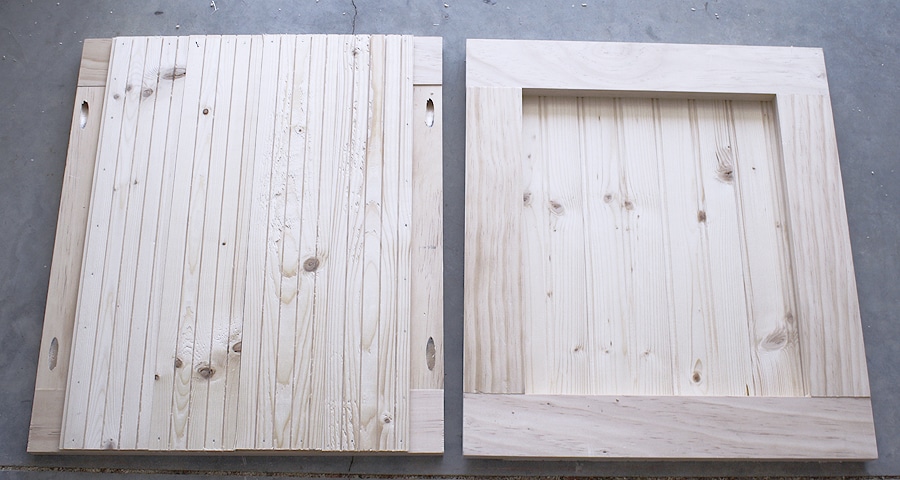 Now they’re ready for their tops! 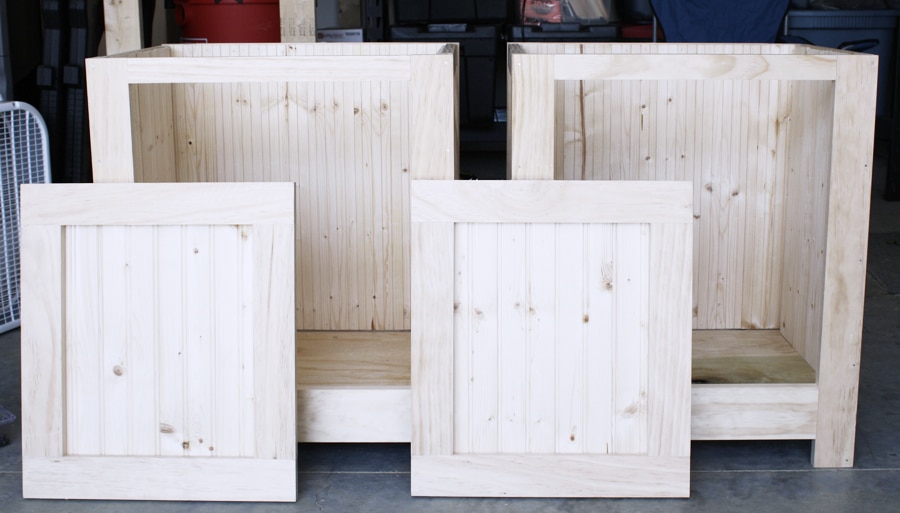 I assembled the top boards by first drilling pocket holes, then joining the boards together, like this: 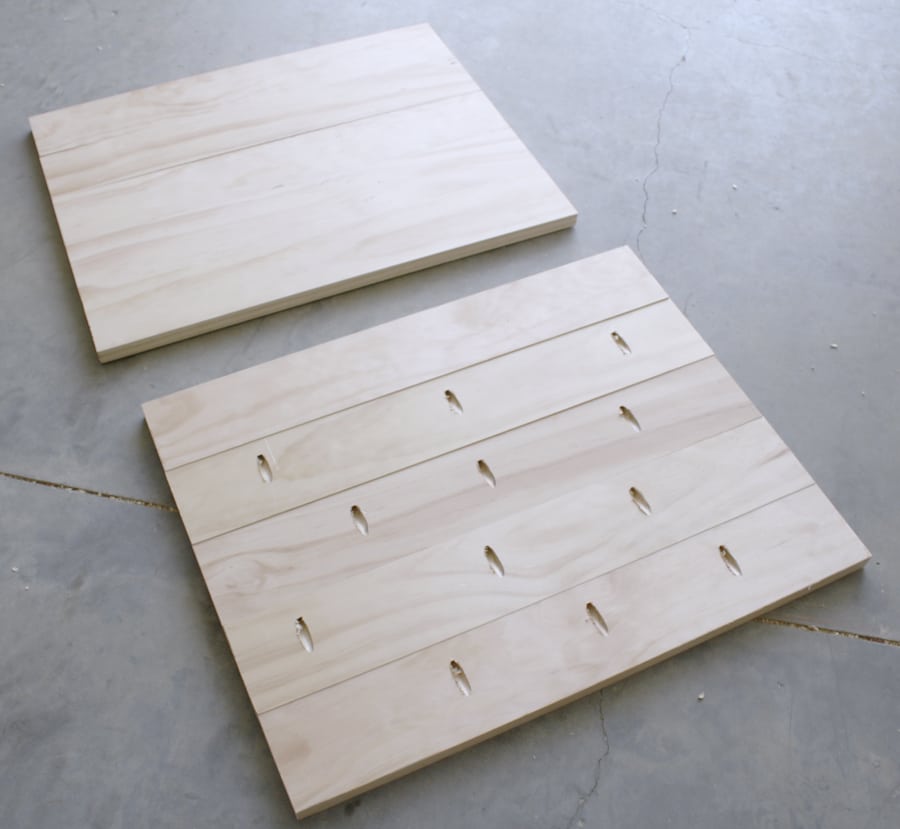 Then I attached the tops with glue and 1 1/4″ finish nails and gave the 2 pieces a good sanding. After vacuuming all the dust with a shop vac, I wiped the nightstands down with a damp rag to remove any remaining dust and debris. 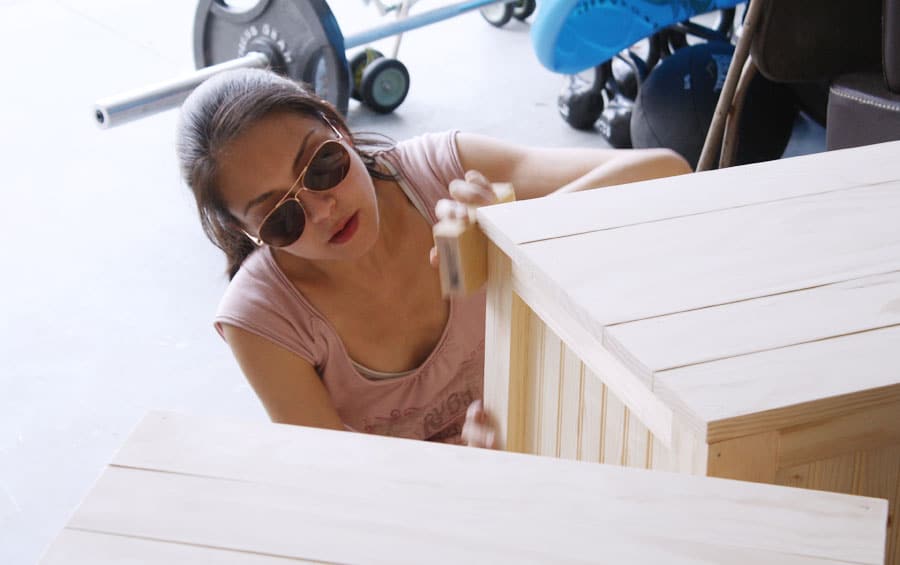 Ahhh… the end is in sight! Here are my lovelies ready to be stained! Aren’t they puuuuurty? 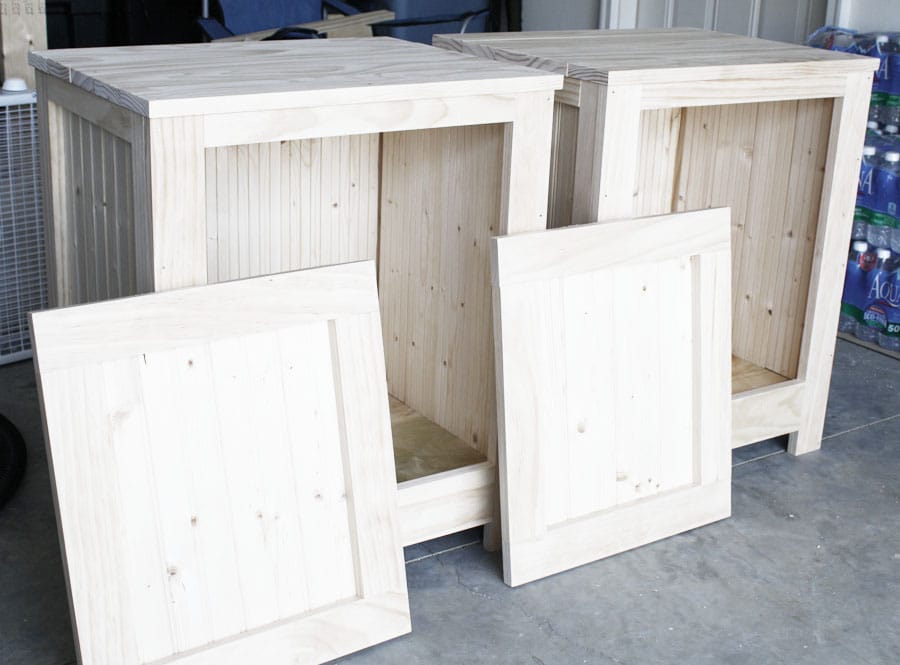 I used Rustoleum’s Ultimate Wood Stain in Dark Walnut. It turned out a little darker than I expected. I probably should have wiped the excess off immediately after, instead of waiting 15-20 minutes like the directions say. This stuff dries in an hour, so after 15-20 minutes passed, it was a bit tacky and more challenging to manipulate. Behold: my embarrassing staining job: 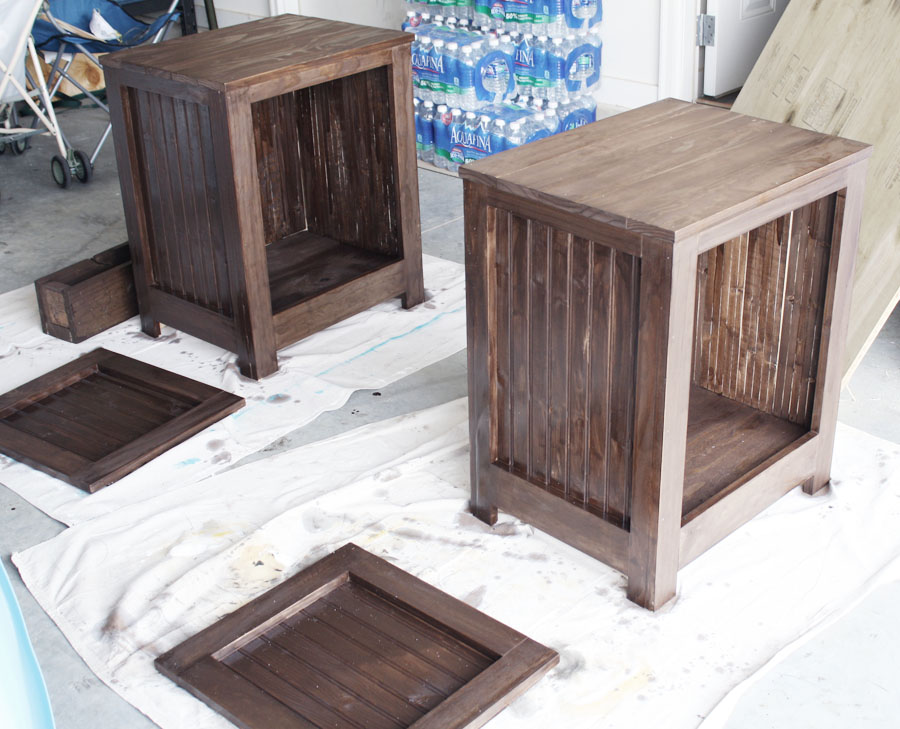 Yuck, with a capital Y, right? So, I fired up my palm sander with 60 grit sandpaper and sanded the stain down, in hopes of improving the finish. This is what I came up with: 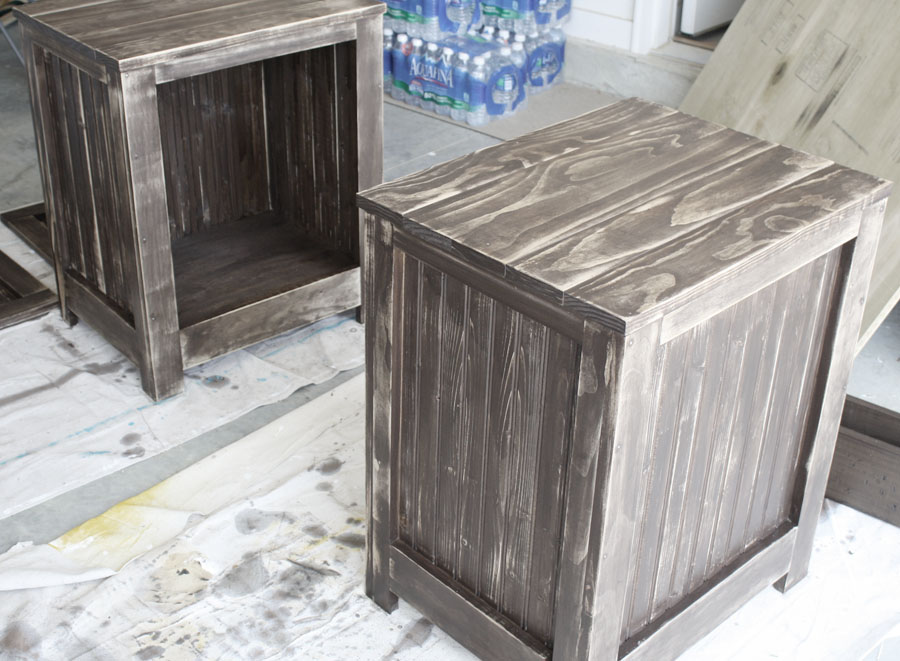 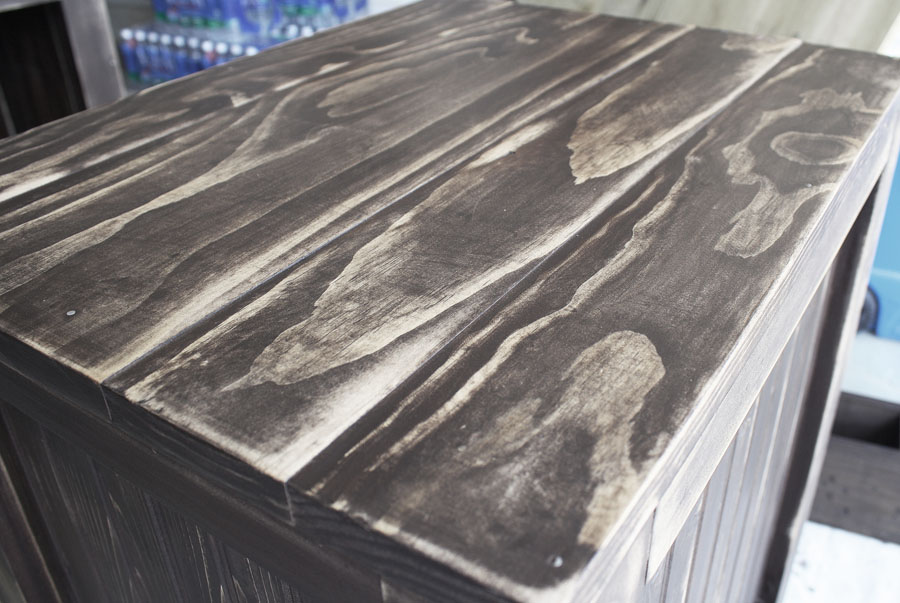 I think I kind of like the rustic finish; it looks like reclaimed wood. I think the imperfections look more deliberate and intentional, instead of looking like I let my one-year-old loose with a can of wood stain. The wood felt coarse from the 60 grit sandpaper, so I sanded the surfaces down with a 120 grit sanding block to smooth it all out again and wiped everything down with a damp cloth to remove all the sawdust.

After I brushed 3 coats of polyurethane on, I drilled the sash lifts and strap hinges on the door and attached the doors. It’s easier to drill the hinges on the door first and then drill the door onto the nightstand (take my word for it). I also included a magnetic clasp on the inside so that the doors click and stay shut. And here they are, finished: 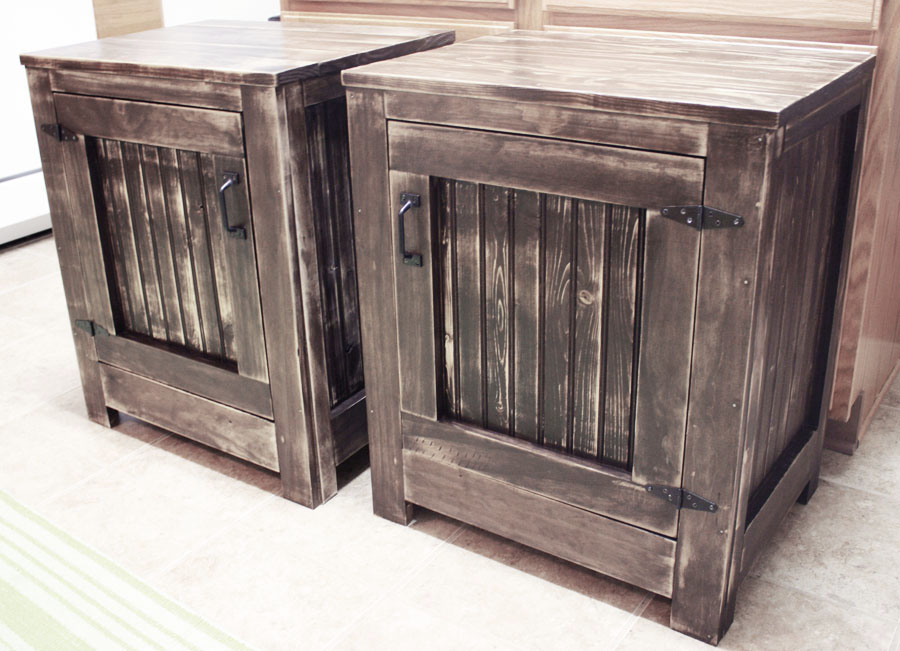 To be honest, I’m not sure how I feel about the finish. I loved these pieces up until I mucked it up with my misuse of stain. I think I’ll refinish them sometime in the future, but for now I’ll wait and see how I feel after we’ve lived with them in our home for awhile. What do you think? Suggestions?

Pin it for later! 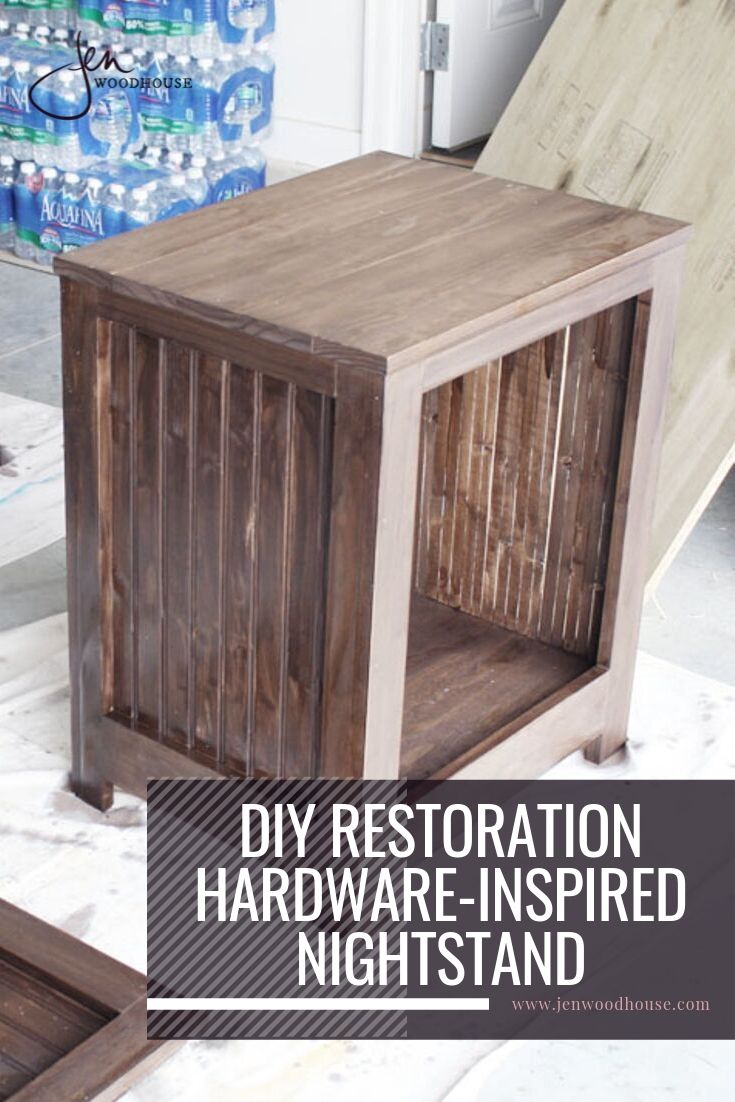